The Nobel Prize in Physiology or Medicine 2018

This year’s Nobel Prize in Physiology or Medicine was awarded to James P. Allison and Tasuku Honjo “for their discovery of cancer therapy by inhibition of negative immune regulation.”

Cancer is one of the most deadly diseases worldwide, and many efforts are being made to find better treatments for the patients. Allison’s and Honjo’s research parallelly found a way to treat cancer by using our immune system. In a natural way, our immune system is in charge to surveil our body and fight against cells that could potentially develop into a severe form of cancer. However, this does not always work and that is the reason why we, unfortunately, know about so many people suffering from cancer. These two researchers found that by suppressing the brakes of the immune system cancer could be treated.

James P. Allison studied a protein called CTLA-4. CTLA-4 is found at the surface of T cells and works as break to stop T cell function. It was known by other research groups the importance this molecule had on autoimmune diseases, but Allison decided to study if it could be used to fight cancer. By giving anti CTLA-4 antibodies to mice with tumors he found that blocking this immune break could be an effective treatment against cancer.

Honjo, on the other hand, discovered another protein in the surface of T-cells called PD-1. He focused his work on studying the function of this protein, which turned out to be another immune break with a different mechanism of action to CTLA-4. Then it was proved that PD-1 could also be use as a target for cancer therapy.

After these discoveries there was a big clinical research effort to turn this knowledge into therapy, and today this therapy is known as “immune checkpoint therapy”, being used as a treatment for lung cancer and melanoma amongst others.

I attended the lecture with my classmates Mengnan, Kavan and Amparo. After a loong wait outside in the cold (for those of you interested in going next year: you’ll need to que for approximately 1 hour if you want to secure a good seat, it gets really crowded!) we made it into the lecture hall. The lecture is hold inside Aula Medica, and it was beautifully decorated for the event.

The stage at Aula Medica minutes before the lecture

The lecture lasted around two hours. First, Allison explained his research with CTLA-4 and then Honjo talked about how was his PDL-1 discovery. My favourite part was Honjo’s speech: it was really inspiring to know how determined he is all the hard work he put into science. 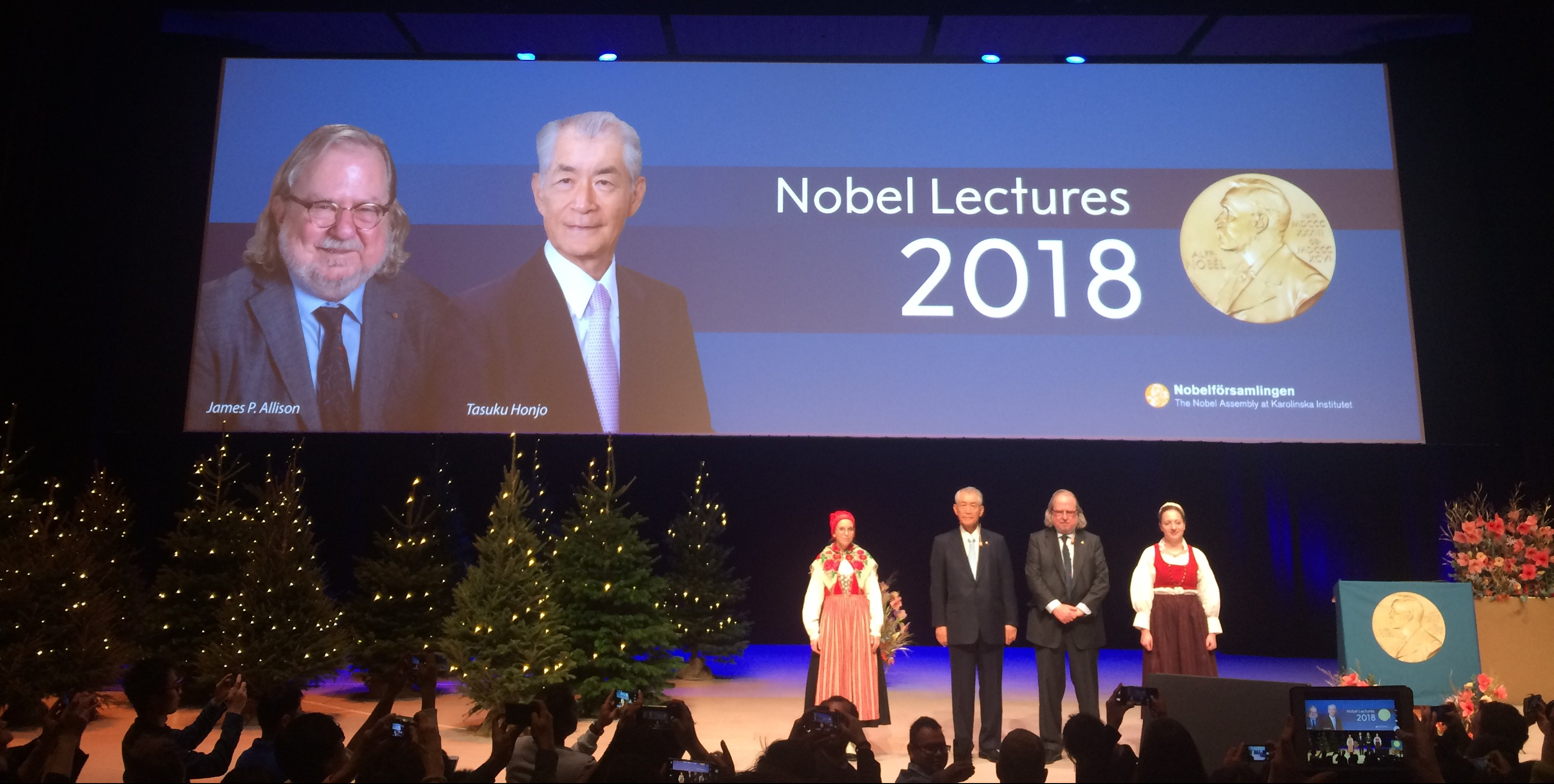 The laureates James P. Allison and Tasuku Honjo after the lecture

Perks of living in Stockholm: you can attend other three more Nobel Lectures

The Nobel lectures in Physics, Chemistry and Economics are also hold in Stockholm, so it is a great opportunity to listen to inspiring researchers and learn more about the world. I went to the Nobel Lectures in Chemistry and Economics. My favouite part of these lectures was the speech of Frances H. Arnold, who received one half of the Nobel Prize in Chemistry 2018. Make sure to watch it if you have some spare time 🙂

If you want to learn more about the Nobel Prizes 2018:

Read more about the Nobel Prize in Physiology or Medicine 2018 here (The Nobel Assembly at Karolinska Institutet).

Watch the Nobel Lectures 2018 (all videos are linked to and can be found in the Nobel Prize youtube channel):

I can’t wait to know which discoveries receive the Nobel Prize in 2019! If you have the chance don’t miss the Nobel Lectures, they were very inspiring and you never know how many times you can be in the same room as a Nobel Laureate 😛