How is the optimal way to dunk a biscuit in a cup of warm tea? Although you might think otherwise, a proper scientific study has been carried out to solve this question. You may laugh and think why would Len Fisher, a well-known physicist from the University of Bristol, put his efforts into answer this question, but you’d realize very quickly that there are actually some fundamental physics behind this process, and that is not a trivial question to ask or answer! I admire very much all those creative scientist that come up with unexpected ideas, and when I found out that there was going to be an Ig Nobel lecture in Stockholm I new that it was an opportunity I could not miss. Very unexpectedly, I ended up playing a role in the lecture, and was even funnier than I could have ever imagined.

What are the Ig Nobel Prizes?

The Ig Nobel Prices are some prices given to research that “makes you laugh and then think” to honor the creativity of scientists. These prices have been awarded since 1991, and every year 10 prices are given in different categories: biology, chemistry, medicine, physics, nutrition, literature…and many more! 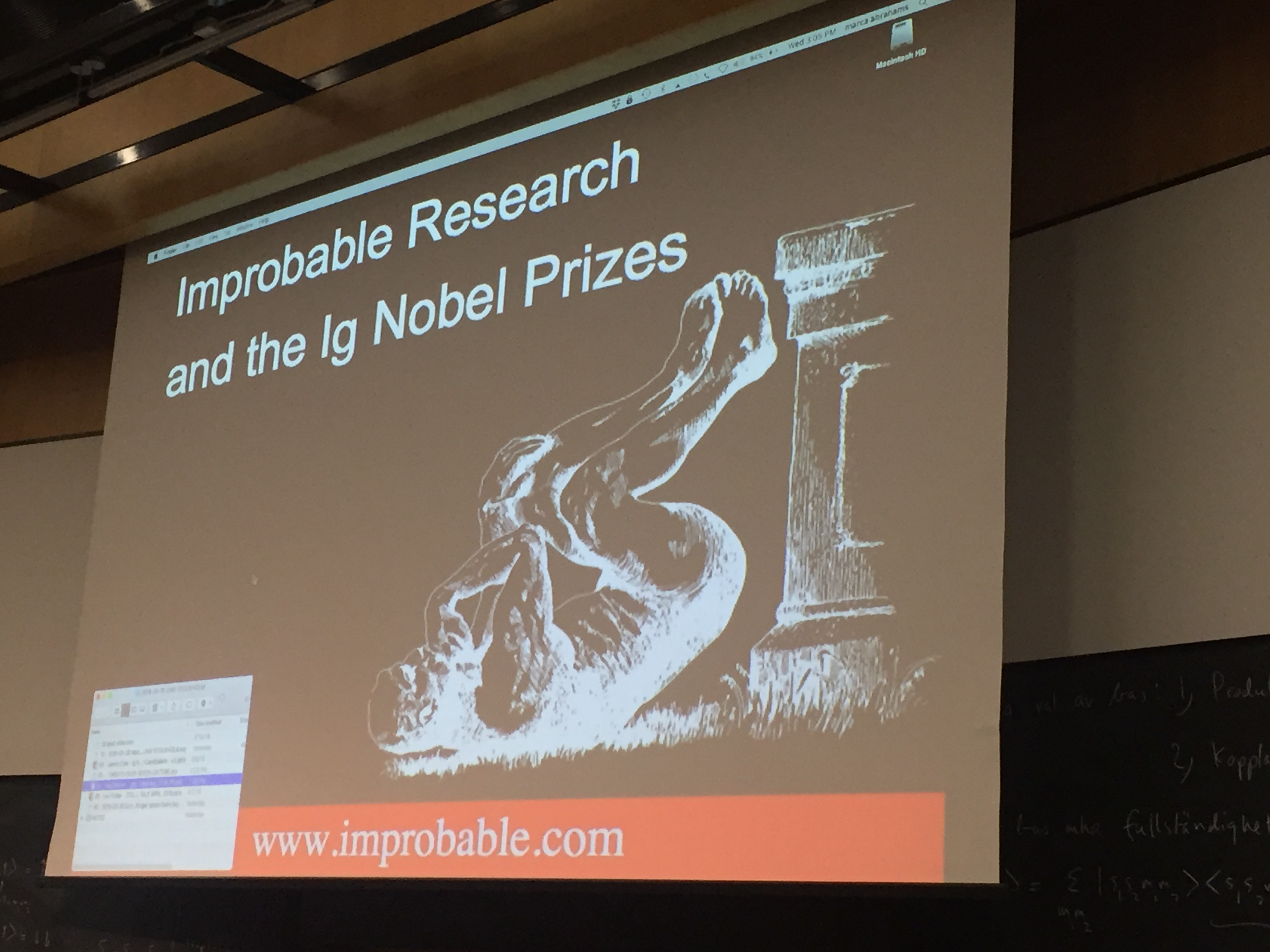 Last week there were a few Ig Nobel Lectures in Stockholm. I couldn’t attend to the one held in KI, but I was able to make it to the one that took place in Albanova, a campus shared by Stockholm University and KTH where the Molecular Techniques in Life Science students have class. The public ranged from senior scientists and young phD students to even younger bachelor or high school students interested in science and wanting to have a fun time.

The first surprise came even before we entered the lecture hall. As I was queueing with my classmate Thanadol to get into the room, one of the organizers gave us some sheets of recycled paper. When we asked what was if for, he only answered: “It’s for the paper airplanes”. I was perplexed. Had I understood him correctly? Did he just say paper airplanes? We had never been to an Ig Nobel Lecture, so we decided to sit and look to the rest of the public and try to understand what was going on. As the saying goes, when you go to Rome, do as the Romans do, and so did we. Everyone sitting there was making paper planes, so we used our origami skills (to be more accurate, my lacking origami skills) to build some paper planes. I was very lucky to have found Thanadol on my way to the lecture, he showed me how to make paper planes like a pro.

Wait…do you want me to volunteer?

Right after we had finished doing the paper airplanes and were quietly sitting in the second row of the lecture room, excited for what was going to happen and paying attention to every detail of the speaker’s preparation, one of the organizers came to where we were sitting. They needed volunteers to control the time of the presentations. At first I was dubious: I wanted to participate, but I had never been in one of these events before and everything looked so unconventional (who builds paper airplanes before a lecture)? After some seconds I decide to give it a go. I only had to control the time, and the opportunity would let me play a more active role rather than just sitting in the public.

I went to the scenario and there I met the organizer and the speakers. I had another person as a helper, and the both of us had just to control the time and let the speakers know when they were running out of time. So far so good I thought, but I had forgotten for a second that this wasn’t your everyday lecture. Instead of making a discrete noise or signal to the speaker, we had to make a very loud shout or noise. The other time-controller knew how to whistle really loud, so my role was to control the timing and his role was to let the speakers know that the time was going by. 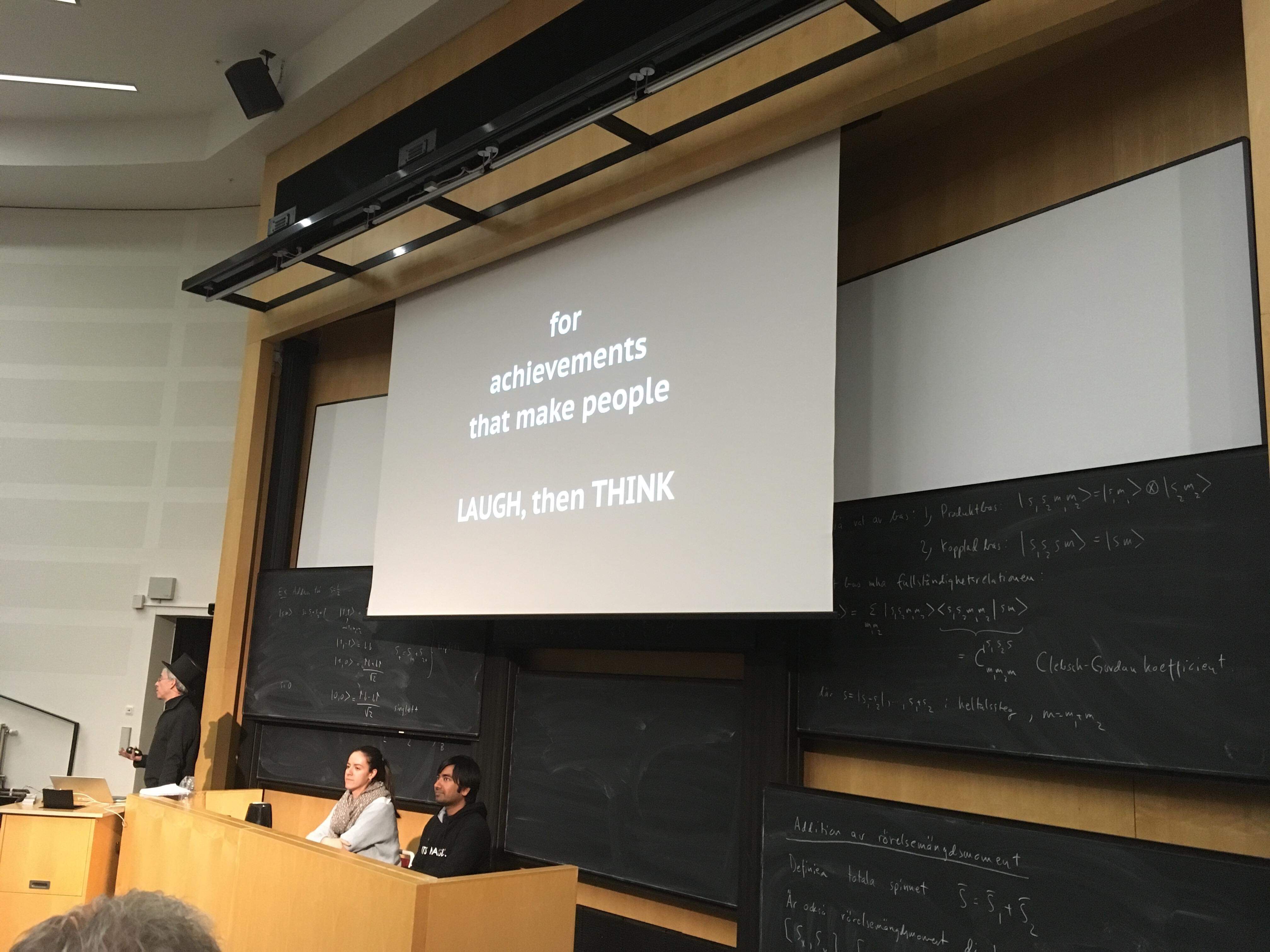 The volunteers seconds before the lecture started!

This is what the paper planes were for!

Suddenly the lecture started, and the very first thing to happen is that a senior scientist from Stockholm University, dressed with a tuxedo and a top hat walked to the middle of the stage and stood there, facing the public. He was wearing protective lab googles and a target hanging from his neck, painted on a piece of round cardboard. All the people attending the lecture had the opportunity to throw one (or both!) of their paper planes to the human target. Although random, it was fun! Of course, it was less fun for me, since I was sitting right behind the human target and I was not very sure how much could I trust the aim of the public. As a time-controller, I had to make sure that the plane throwing could only last fifteen seconds, and I had to shout “STOP!” as loud as I could at the end. After those few seconds of chaos, everything went back to normal and we sat there, listening to some rather unconventional research. 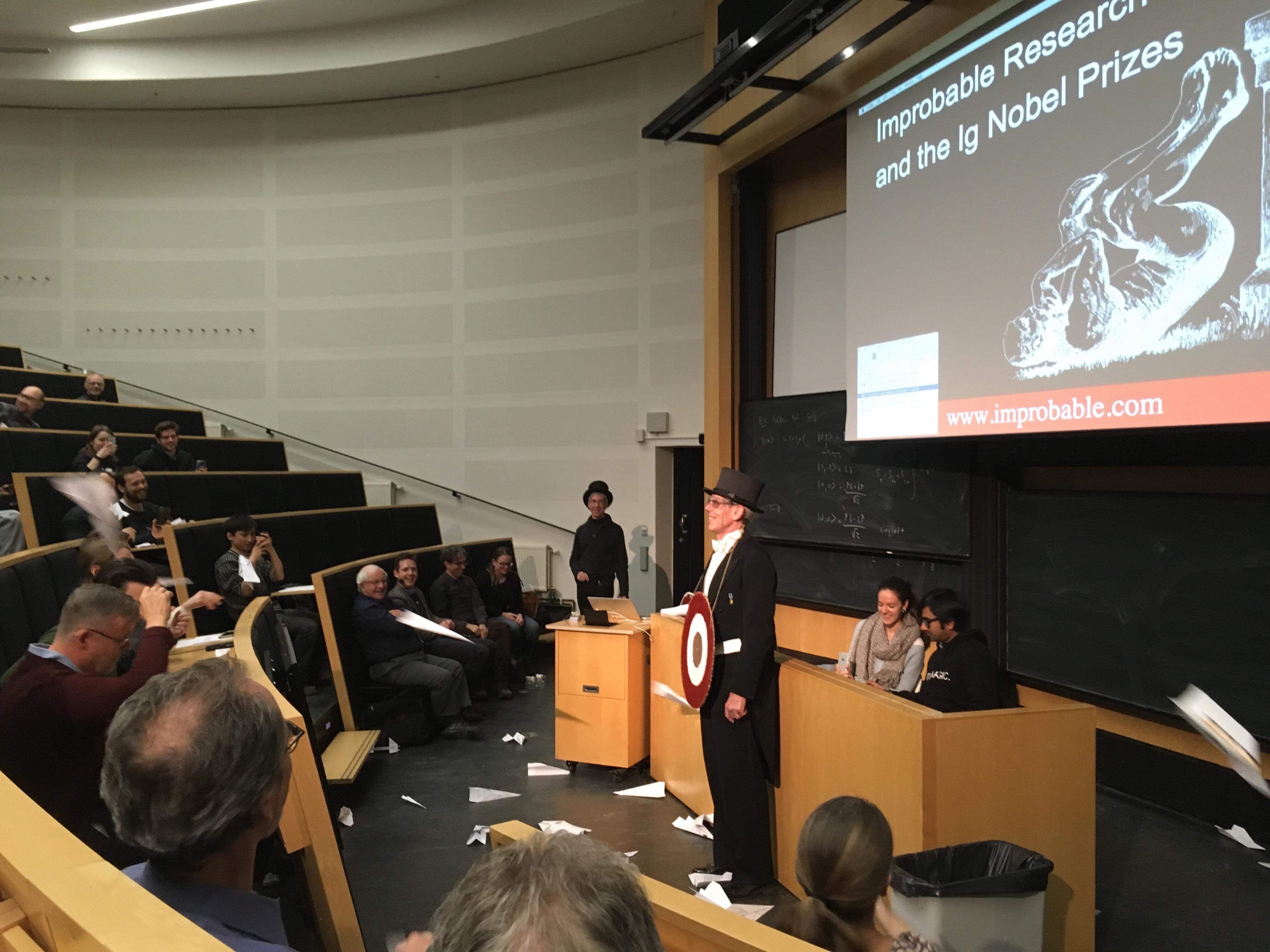 Risking our lifes during the paper airplane throw

From cannibalism to smelling flies and dunking biscuits in tea

There were three main speakers in the lecture, all of them winners of an Ig Nobel Prize. The first speaker was James Cole, who had made a research about the caloric significance of events of human cannibalism in the Paleolithic. One of his main findings was that cannibalism gives a way lower nutritional value than other animals found with hominin remains. There’s no need to be scared! 😉

The second lecture was by Paul Becher, who found out, with the help of colleagues from Sweden, Colombia, Germany, France and Switzerland, that expert wine testers could identify if a single female Drosophila melanogaster fly was in their cup of wine only by smelling it. I also wondered how on Earth did they ended up finding this. Well, apparently it has been known for years that female Drosophila melanogaster flies produce a chemical substance that makes them smell differently to male flies. These researchers found this substance, called (Z)-4-undecenal, is produce in an amount of a couple of ng per hour by each individual female fly – and still expert wine tasters can smell it!

The last main lecture of the day was by Len Fisher, who in 1999 got the Physics Ig Nobel Prize for determining the optimal way to dunk a biscuit in a cup of tea. This was my favorite one of the afternoon, and since the lectures were only ten minutes long I would really recommend to watch it! You can watch the event here. The lecture about dunking biscuits in hot tea starts at 1:20:00.

Describing your research in 24 seconds and using 7 words: is it possible?

The main lectures had some little breaks in between to do a second round of paper airplane throwing, and to listen to four KTH and Stockholm University young researchers to describe their work in a rather curious way. First, they had to describe it in a technical way in only 24 seconds. Then, they had to describe in simpler terms, for the non-experts in the public, using a single sentence of only seven words. If you try to do it you will find that it is very hard! The descriptions that they made were very good, and even if I didn’t understand much of the technical definitions because they had to much physics for me, I really enjoyed the shorter ones.

At the end of the event, all the speakers took a picture together and we as volunteers were also invited to join, it was a nice memory. Also, we had the chance to ask our questions and to speak with the lecturers, that were all very happy to discuss with us and to see our interest in their work. 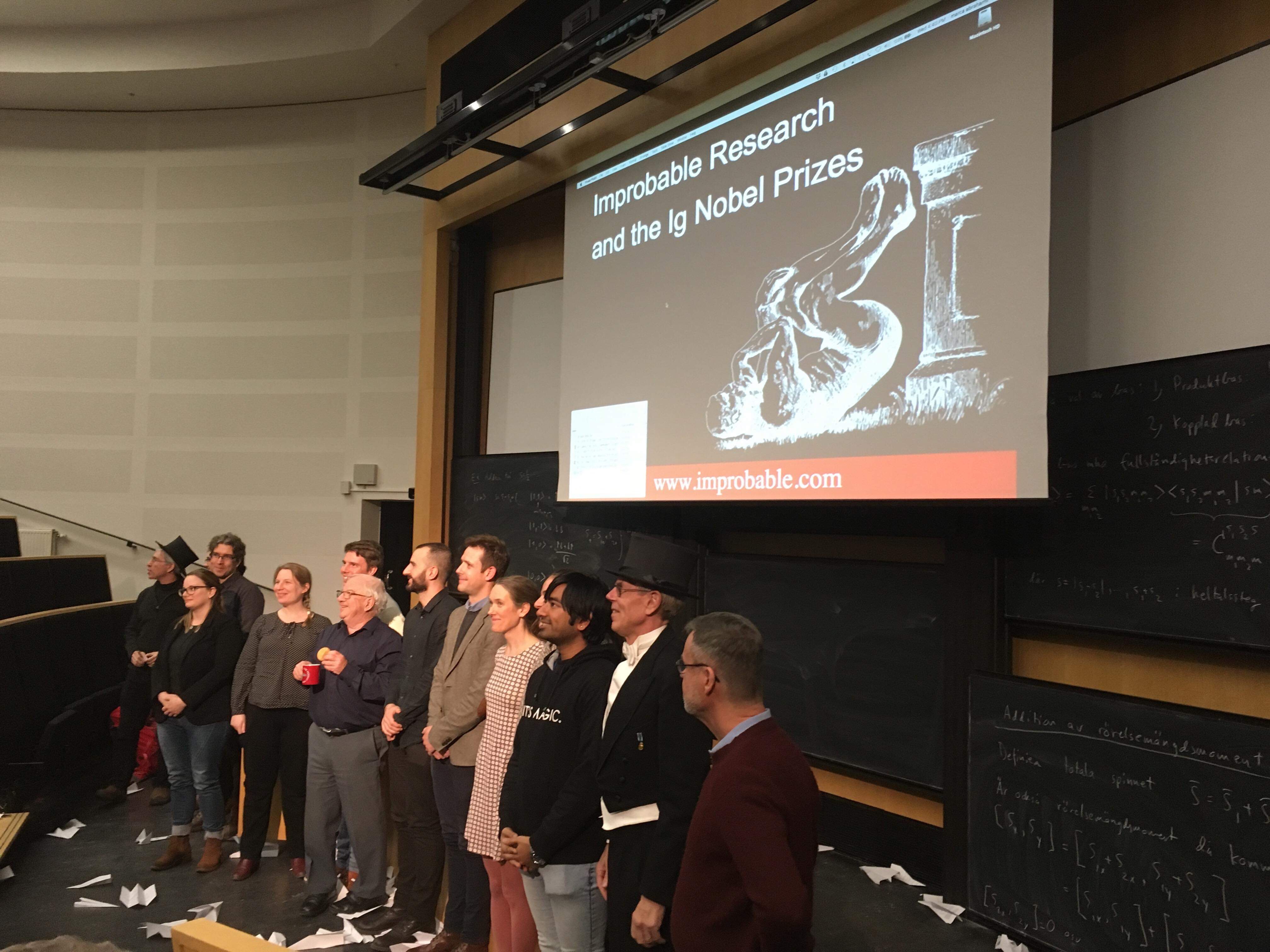 I’m sure I’ll try to attend the next Ig Nobel Lecture organized in Stockholm if I can! Even if it’s not going to be as surprising as this time, I’m sure it will be fun to listen to other speakers and to sit in the public next time, far away from the deadly paper airplanes 😉

We’ve finished the first ever semester of MSc in Translational Physiology and Pharmacology and let me just say that is was a long one. Most of it was focused on […]

Since I arrived in Stockholm, every day has brought me something new. However, some days were just normal as everyone else’s, and some days were too fast that I couldn’t […]